It was 2013 and I was 3 years out of my marriage. Three years and three kids. Three is a very powerful and symbolic number in our society, from the holy trinity to 3 Doors Down to 3 sheets to the wind. At this crossroads of threes, I assessed that the kids that “seemed to adjusting well,” whatever that means… On one hand, it means that they were spending every other weekend with their dad, that they were active with friends and that were doing well in school and seemed to be happy. On the other hand it meant leaving me with time alone. That is the part of divorce that I hated the most and left me feeling sad and remorseful and angry, having to share my kids. But that all changed eventually, like everything does, into something that I enjoyed and looked forward to just as much as my weekends with the kids. But that took time, lots of it, experience, and most of all, courage. Being in this crossroads left me with a lot of questions about path I should take personally for my future. It took taking risks and making myself vulnerable to grow and open myself up to new opportunities.

Examining my circumstances at this crossroads, I found that I had friends, sure. Good friends. Fun friends. But they had families too, full time, not every other weekend. They were busy. So I made new friends. We formed a dinner club, you guessed it, all three of us! Us three and our kids. My two new friends were deeply immersed in the online dating scene. They were meeting all kinds of men. Some turned out to be one time dates, some lasted a month or two, and some were straight up one night stands. But I was observing and learning while we mulled over, laughed over, and analyzed each and every date. Then they both hit the jackpot-they each found somebody just right for them. Many years later, they are both still with those men. Lucky them!! Lucky me for having single friends to share the ups and the downs of being “Seriously, single again??” I do not know how I would have faired without these lovely ladies. But, their weekends without kids were the same as each other’s but not the same as mine.

I would spend full weekends sans kids without talking to a soul except perhaps, the grocery store clerk. I read books: self help books, classics, trash, non-fiction, you name it. I was on the path to becoming so self aware and so smart and so well read! Ha! Hiding in my house. Fearful.

My kids were involved in sports so that kept me super busy. I prided myself on being their number one fan and not missing a single game. Another way of hiding, albeit a productive and justified one. My house needed attention so sometimes that kept me busy (hiding). I recaulked bathrooms, refinished patio furniture, touched up wall, and washed windows, convincing myself that I was smart and self aware (or perhaps indulgent), a committed and doting mother, and I was a badass homeowner. And I was independent dammit.

Looking back on that time, I think to myself, “Did you really think that you would find all of those things in one man?” Ha! That sounds so funny to me now. But anyway, I embarked upon the adventures in online dating with lofty goals and unrealistic expectations. I had hope and was ready to be patient. I had the power of three with me as I carefully placed an interesting mixture of humor, availability, and desire in a wheelbarrow balanced by three wheels constructed of excitement, courage, and hope. And so begins my “adventures in online dating: you can’t make this shit up.”

Sometimes the wheelbarrow moved quickly and swiftly, sometimes a tire became flat and the other two had to work a little harder while I wobbled and struggled and floundered, and sometimes a tire fully broke and the vessel sat in my driveway for a while. But never for long. I kept picking that wheelbarrow back up in search of love and companionship. This blog chronicles my adventures.

My story begins fairly inoccuously and I even found a period of success. But then all hell broke loss. The freaks came out at night, if you will. Again, stick with me to hear more about this in future installments…

I completed step one of my match.com profile, “describe yourself.” Ummm…a divorcee who was unable to maintain a relationship longer than 15 years? No, that isn’t appealing. Ummm…a woman bitterly disappointed by the disetegration of her family and her core values? Haha, no. Ummm…a woman seeking a life partner? Ugh-I don’t want to scare them off right away. Alright. I like to go deep. I like to be honest. I don’t think that I should stay true to both of those traits with this online dating business. Here goes…A woman seeking a long term relationship with an adventurous soul who takes life seriously but also has the ability to laugh at himself. Wait this isn’t about me. This is about somebody I don’t even know yet. Let me rewrite this to be about me. I don’t want to be that woman who can’t even describe herself but rather describes her man. So, as you can see, creating the profile took me a while. I do not even remember what I ended up with that time. But it worked. I got all kinds of messages, right away. A few messages and the men attached were cute and intriguing but mostly not so much. But enough were interesting and interested in chatting with me that I kept a notebook with a page per man to help me keep track of who is who..

Nick, cute with a hiking pic. 2 kids, went to UMD. Lives in Mt. Airy. We have discussed jobs (he is in sales)…

Nick, one of the cute and intriguing ones, and I were engaged in some intense conversation, messages flying back and forth heavy with vigor and curiosity. Then, smack in the middle of the wittiness and charm coming from me, he disapppeared. It was evening time so I thought, perhaps he went out or perhaps he went to bed or perhaps he was putting kids to bed. Well I never found out where he went because he never returned to the riveting conversation that was certainly leading to love. What the heck? Well, there were hopefully more reaching out so I advised myself to move on…I am beginning to get good at that, whether I want to be or not.

Feeling a bit rejected, I awoke the next morning to a “match of the day.” The man had on a pirate shirt… 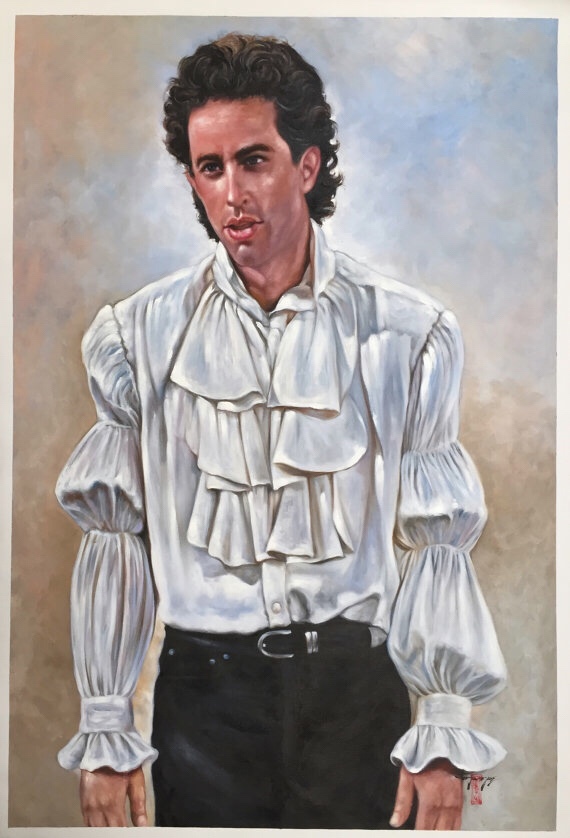 (think Seinfeld). WTF?? The next day, I awoke to a new match of the day wearing colonial style clothes with with a young girl standing next to him in a drab, conservative prairie dress and a handkerchief on her head…

Not unlike this famous painting. Is this what match has for me??? Match.com does not know me at all. This is never going to work. So what do I do? Well I took a screenshot and sent it to all of my friends, of course, making fun of him but also expressing my sense of hopelessness. I try to forgive myself for this mean caddiness, but one ingredient of my wheelbarrow is humor, after all. We all got a good laugh at some lonely man’s expense but they also encouraged me to continue. So I did.

Soon, I had two hits. Very palpable hits (shout out to Hamlet, remember how well read I am?) Anyway, I was having sustainable conversations with both Mike and Dan and both expressed an interest in a date. I begin showing pictures of both to my friends, seeking approval, analysis, and encouragement. My friend said, “Well Mike looks like a nice, amicable, kind ginger. Dan, however has a glimmer of trouble in the twinkle of his eye.”

I responded, “Well hopefully I like Mike because I am exhausted by, and tired of, trouble. I have been down that path before and I am ready for a new path, something different.”

I had first dates with both. Guess which one I spent the next three years dating?

Date #1 with the ginger is on deck. Stay tuned.