Do you remember the roller skate rink’s DJ saying, “Time to slow it down folks- this one is a couple’s skate.”

Well this one is a couple’s story. My version of it anyway.

Dan (The Head Tilt) and I took it slowly. We had trail running dates, kayak dates, and we had dinner dates. These dates were full of fun and laughs and kisses but most importantly, deep conversations about truth. We both craved truth and wanted so badly to offer to others and receive from others the truth. The truth binds us to one another while at the same time, the truth sets us free. It is mystical like that.

Deep conversations are the highest form of foreplay for me, so it wasn’t too long before Dan and I were a couple.

It lasted for 2 1/2 years. Then it lasted one more time for 7 months. In the early stages of our relationship, Dan once asked me in fear, “What if this doesn’t work out for us? Will you feel that you have have wasted time with me?”

I did not hesitate for a second before assuring him, “No. Not one second of it.” You see, I learned so much from Dan for which I am eternally grateful. Through him, I learned so much about myself and about love. He showed me how to step up my sense of adventure, how to bring truth back into my life, and how to find a beautiful balance in this chaotic world. I learned about adventure, pushing my physical limits, and about living in the moment. Why would I ever regret that? I learned those things, in a large part because of him, this the title “I’d Still Give My All, ‘Even Though We Break Up In the End.” A beautiful song by Cole Swindell inspired that title. Check it out. Cole Swindell

Dan and I traveled a lot. We went to the most amazing places in our country, places I’ve never seen, places I had seen, but all it looked more beautiful with him. I can remember the first time this epiphany swept over me like a refreshing, rolling wave.

He and I were up in Gettysburg, Pennsylvania, a place with which I am very familiar. We were driving along one of the main thorough fares and we were brought to a stop, a dead end where there shouldn’t have been one. Perspective so intrigues me. Yes, the car was stopped but the opportunity in front of us was liberating, enlightening, and spectacular. And that is what Dan is best at, finding those opportunities and being in the moment to truly and fully enjoy them. We pulled over to the side and got out and much to our surprise, the sky began to light up with fireworks. It was one of those serendipitous moments where you just can’t believe you’re really there. Fireworks appeal to every one of our senses in a communal way. You know the feeling. The loud boom, the booms that resonates deep in our bones and shakes our beings. The smell of the smoke and sulfur, the feel of the summer air in our hair. And as we look up at the sky, we see the amazingness of the colors and the falling fades of the glows. Our sixth sense feels the camaraderie of patriotism-the desire to reach out and grab the hand of the person next to you. That is just what Dan and I did. We held hands while watching the fireworks and then we held hands each time Mother Nature offered us her version of them.

We stopped and held hands in wonder from across Colorado while exploring the Rockies to right here in Frederick, hiking the watershed. We held hands while gazing up at Aspen trees with their shimmering and dancing leaves. While passing gorgeous green streams and while racing down the mountain fleeing a hail storm. While kayaking beside alligators in the bayou. While sunning ourselves on warm rocks after a crispy cold swim in Red Rock, West Virginia. While stopping to skip rocks along the Greenbriar Hike/Bike Trail. While at the statue tribute to John Brown in Lake Placid.

OK, that one was not created by mother nature, but it was naturally coincidental because I was in the process of making my way through The Good Lord Bird, by James McBride. This book is about John Brown, the not so peaceful abolitionist, who I am admire for his courage, but who also makes me sad for his flaws. I wasn’t too surprised to find John Brown’s home (and his statue) on a hike in Lake Placid, smack dab in the midst of reading the book. Shit just lined up like that, all of the time.

And one time it was reaching the end of 184 mile C &O Canal bike trail. The first day we rode 64 miles on bumpy trails. The second day, when I first got on the bike, my ass hurt so much I didn’t think I would make it. After an hour, numbness set in and we made it! Day three was glorious. Here I am at White’s Ferry, day 3, knowing we had almost reached “the top,” resting while taking in the intricacies of both how the ferry worked and enjoying the peace of the water view:

Another time, we pushed physical limits on bikes by peddling our way up the steep road to the see the hills come alive at the Trappe Family Lodge in Stowe, Vermont. We stopped and drank water out of bubbling brooks, we swam in murky swimming holes. We pushed our limits through sun, rain, lightning, and God’s absolute beauty. We loved all along the way.

I learned to re-discover myself sexually once I was able to let go of time limitations and other inhibitions that had been stifled by three kids and, well, just life. It was the type of awakening Kate Chopin created for Edna. Except, thankfully, I was no longer married and I know how to swim. 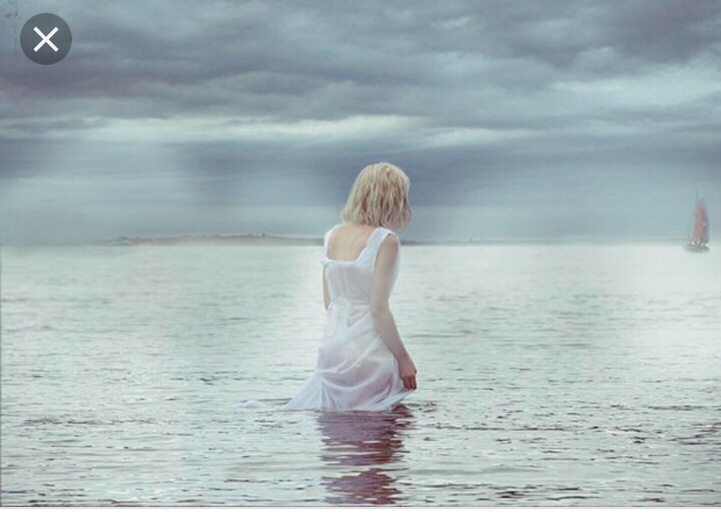 And, yes, some of my awakening and discovery was done right out there in Mother Nature. Let go and get busy.

I didn’t think I had it in me. Well, there are fuzzy memories of breaking a(n unstable) park picnic table that could not withstand the weight of two bodies, late night in the outskirts of downtown Greenville, NC. Oh and then there are memories of violating a complete stranger’s boat in Newport Beach, CA. But that was back in my 20’s. This was my mid 40’s. Shew. What is age but a number?

Next thing you know it, I am getting busy beside a waterfall, behind a rock on Black Rock Cliff trail, behind a dilapidated, broken down farmhouse…I didn’t drown in the sea of love like tragic Edna. I thrived in it. I engaged, I swam, I was energized! I wanted more emotional love, more physical love, and more truth. I was born into a world that encourages these things for all!

Dan’s gift also extended to finding beauty in pain through admitting and accepting the truth. He coached me through trials and tribulations, bringing us closer and also allowing us to grow as individuals. He did it through asking probing questions and through what we jokingly called “paperwork.” He would asked,

“What are three things that make you sad…”

“What are three things that you are proud of about…”

And the power of three worked to help me find the root of my joys in my blessings. Dan’s well planned out paperwork helped both of us discover joy in disappointments, joy in failures, and joy in ourselves. Acceptance of place, acceptance of self, and acceptance of one another. The final one is what broke us up. We struggled to find compromise in the midst of our differences and rather than allow resentments to grow, we set one another free. Mistake? Perhaps. Easy way out? Perhaps. I have no regrets but letting go was not easy. Especially because Dan also taught me how to rediscover myself and realize that I can stop and experience the wonderment or metaphorical fireworks all by myself.

When we walk away from a love like that, where do we go next? Edna goes out into the ocean, knowing that she cannot keep herself afloat. She does because she cannot return to her emotions-less marriage after experiencing strong physical and emotional connections with other men. Does she walk into that water because of fear of judgment and/or disappointment in herself? Or does she walk into that water because of FOMO on life’s passions now that she has discovered them? Is it fear of loneliness that drives us to search for love? Or could it be that we are compelled to embark on a quest for our next “love fix” because love is more powerful than fear?

On deck, fear of the no-show.

6 thoughts on “I’d Still Give My All, “Even Though We Break Up In the End””