The launch of the 2017 holiday season presented a beautiful day. My friend and I were enjoying a stroll in downtown Frederick when we countered a brand new consignment shop. We wandered in and discovered it to be an upscale consignment shop with amazing vintage clothing, shoes, and jewelry. The store’s contents made sugarplums dance in our heads. The sugarplums must have been spiked because I went crazy in that shop.

We each gathered up a few items and took them to the dressing room. The owner nailed our individual styles as she delivered stuff to our dressing rooms. A woman just my size had recently dropped off a gold mine for me.

I came out of the dressing room in an emerald green cocktail dress. My friend said, “That would be the perfect dress for my sister’s party.” The perfect green Christmas dress.

She said, “No. My sister and her friends dressed to the nines and go formal.” Lie #1.

Her sister’s party was approaching, and I was invited in part because her sister and I like each other. And in another part because they wanted to introduce me to Albert.

Over the many years of being divorced, my friend has told me that she knows my soulmate. Albert is her sister’s friend. They used to work together back in their twenties. My friend said we are both equally nerdy with our love for reading yet we are both balanced with a wild side that sometimes sends us on dark paths. And that we both wear glasses. Huh?! I wish that was lie #2, but it wan’t.

When I first divorced, Albert was dating somebody else. When he parted ways with her, I was dating Dan. And then, drum roll please…we were both Suddenly Single.

I should have known she was leading me astray when she convinced me to purchase that silk green cocktail dress for the party. But instead of being skeptical, I threw in some gold shoes for good measure.

I should’ve realized she was bullshitting me when I asked her, “What are you going to wear?”

Her response, “Oh I’ve tried a few things on, but I don’t like the fit. I can find something in my closet, I’m sure.” I am sure that I could have too, but I got caught up in the shopping frenzy and lost my mind, drunk on spiked sugarplums.

As the date of the party approached, she warned me that Albert may not be attending because his ex-wife was having some major health issues. Lie #2. She knew I would be a sucker for a man so caring that he would put his life on hold to help his ex-wife. He was a ‘maybe.’

The night of the party, my friend picked me up wearing a sweater and jeans. WTF? I’m in a prom dress. I’m freezing and she’s all cozy wearing jeans and a sweater. I should have run back inside to change, but we were running late, and she was rushing me. Lie #3.

We arrived to the party and as we entered, I noticed that everybody was wearing jeans and a sweater. Everyone except me and a pregnant woman who also was wearing a dress (not a cocktail dress, just a dress) because she was so pregnant that none of her pants fit.

Allow me to elaborate on just how awkward I felt. I knew about five people at this party: my friend, the hostess, her husband, and her kids. That’s it. Plus, all of the windows were open in December because the place was packed and, of course, that crucial little detail that everybody (but me and the hot pregnant lady) was in winter sweaters and jeans.

Actual footage of me primping for the party:

I believe that the tattoo adds a nice touch, don’t you? Good thing Albert never showed. Good thing I have to chaperone the prom this year at my high school. At least the dress won’t go to waste.

Apparently, he was at a tennis tournament and said he may come if his team got eliminated. They played well.

When I asked my friend’s sister about the ailing ex-wife, she said, “Oh yes, she’s very sick. But that has nothing to do with why he was a ‘maybe.’ That had everything to do with the tennis tournament.”

When I questioned my friend about the discrepancy, she said she wanted me to think that he was taking the party (and meeting me) seriously. Whatevs…

Well, after having dressed up for him once, I decided that would be the first and last time something like that would happen. *That is me foreshadowing the rest of the story.*

After the holidays settled down, I received an email from Albert. In this initial email, he was funny, inquisitive, and seemed to have a lot of potential. After emailing back and forth a bit, we decided to meet.

Our first date was quite lovely. The conversation flowed freely as we shared, laughed, and enjoyed each other’s company.

There was one red flag. When I talked about my college days and mentioned that I was a cheerleader at East Carolina, he too enthusiastically interrupted my story with a question, “Do you still have your cheerleading uniform?”

To which I quickly responded, “No,” and returned to my story.

The date ended fairly benignly: a hug and proclamations that we would love to see each other again.

It wasn’t until a few hours after the date that the question began nagging me. I should not have rushed the rest of my story. I should have asked him why he wanted to know if I still had my uniform.

That week, we continued corresponding and set another date. This date had a much different feel. We walked and chatted organically at first, but then we sat down to a meal. As we waited for our food, he got out his phone and took pictures of me to send to our mutual friend. Something about this felt very weird, forced. I can’t explain it, but in retrospect, it was my second red flag. I lost my appetite (very unusual for me) and felt antsy to leave. But I ignored my feelings.

This date ended much like the first, congenially with no kiss but a friendly hug.

We proceeded through the week with more corresponding and set our third date. Within this texting banter, I shared that I was discussing ways of dealing with anger with my students.

I would like everybody to take a moment and try to conjure up a guess. I could have never predicted this.

He typed, “Whenever you find me angry, just slap me across the face, grab me by the throat, kiss me, throw me down on the bed, and ride my bone.” Singular. Not bones, bone. Yup, I double checked.

Hmmm… how to respond? Remember, our physical relationship had not gone beyond a friendly hug. I really didn’t know him well, so I decided to play along, sort of, but at the same time not play along. Balance, I tried.

My response, “Good to know. Thanks for the advice. That would have never been my first reaction to anybody’s anger, ever.”

My effort to diffuse the path of this conversation did not work.

His response, “Another good thing to know about me-if you had your old cheerleading uniform, I would’ve requested that you wear that. But since I know you don’t, how about wearing a short skirt and a low cut ECU T-shirt this weekend? That would really disseminate my anger.”

Well, my friend was right about one thing: he is clearly well read and has a broad vocabulary that is balanced with a ‘bad boy’ streak. It’s just not my kind of bad boy. Fifty Shades of Gray was not my jam.

I do try not to be prudish so will try to play along with all kinds of crazy shit…but… Do. Not. Tell. Me. How. To. Dress. Especially not in the wake of having worn a cocktail dress to a jeans and sweater party. Now, the big decision. Do I tell him I will not be coming this weekend? Or do I arrive in baggy sweatpants?

My response, “This conversation is making me uncomfortable, and I will not be at our next date.” And at least he had the decency to apologize.

Just as an interesting tidbit: a couple of months later, I found myself on a dating website again, engaged in conversation with a man who asked me what sports I did back in the day to have cultivated and maintained such a bangin’ body. Haha. Like I said, I try to play along with some crazy shit, so I responded and told him I was a cheerleader, a gymnast, a swimmer, a runner…

Guess what he asked?

You got it. “Do you still have your cheerleading uniform?”

Why do these men want to see this: 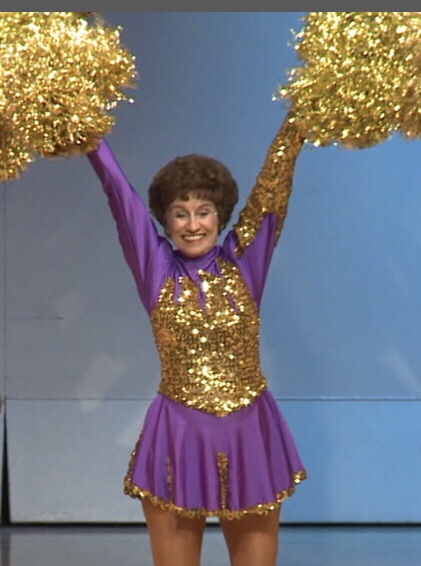 On deck: More from the Creeper Series.