July 4th, 2019 reignited my writing muse. Following a long but fun day of boating, paddle boarding, cold beers and good food, our crowd settled down to watch the show. Fireworks exploded into brilliant colors in the dark sky, causing people to oooh and aaah while dogs cowered and whimpered. There I sat, next to Elias, wondering if I should continue ooohing and aaahing or go inside and comfort my frightened dog, Charlie. 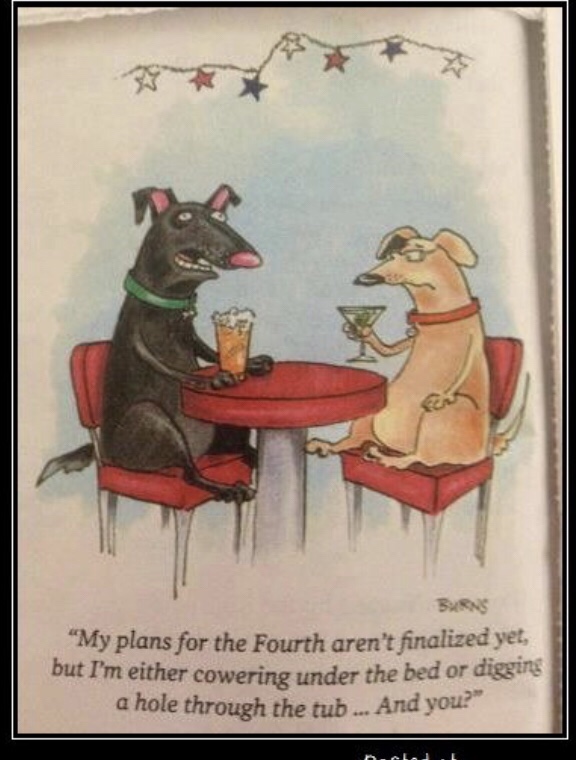 My ongoing internal struggle to find balance in my life was thankfully interrupted when Elias asked, “Why doesn’t Trump need glasses?”

I looked at him quizzically and said, “I have no idea.”

Then I said somberly, “Oh God, now I have to cry again?”

This triggered a check in with myself while I went inside to comfort my dog and take a shot of fireball, “What are my current deal breakers? Politics? Appearance? Money? Education? Could I love somebody who doesn’t cry over politics?”

The morning after the 4th, trying to keep my muse energized, I asked a friend, “Do you and your husband have common political views?”

She said, “Heck no. And it has recently become a huge problem.”

We discussed how, in the past, she and her husband never really got into political discussions. But with Trump in office, that has changed. She has a huge hatred toward him and he has a huge love for him.

They have been married for 20+ years, so my money is on their mostly amazing marriage surviving the 2016 election. Fingers crossed.

But, all of this begs the question: what is your deal breaker? What is mine? So I began polling, political pun intended.

Dating at my advanced age definitely has its trials and tribulations. For example, “Why the fuck am I still dating at this age? I am tired…I want deal breakers to be a thing of my past.” I want my deal breakers to be shallow and uninspiring like my married friends: One wants a man taller than her. No hairy ears. No hairy bodies. Because they are in long, happy marriages, they do not have to put much thought into a deal breaker with any depth. But I cannot subsist in that world of simplicity. So where am I?

Luckily, dating at my age also comes with benefits too. Many of us have a better grasp on our deal breakers because of experience, insight, and well, just knowing ourselves better.

When I began dating a recovering alcoholic one of my friends said, “Seriously? How? I would never go out with a non drinker. Ever.”

Funny how we care about different things. In response to the very same date story, one relative skimmed right over the non-drinker comment and asked, “What kind of car does he drive?”

Another yanked up the parking break while going 40 miles an hour and skidded right into the heart of matters, “How big is his dick?”

Each of those questions represent things that we care deeply about: finances and sex.

My friend who would not date a non-drinker is not alone though. The evening of July 5th, the muse sprinkled a path of fairy dust to my friends’ house to shoot the shit over drinks. Thanks Paula and Ted. There I met a newly single woman who shared her story of a recent first date. She ordered a mixed drink. He ordered a club soda. She asked about the club soda. He responded, “I don’t drink.”

Turns out, many adults that I have polled say that a non-drinker is a deal breaker for them. Another said that not accepting his weed smoking is a deal breaker for him. Elias acknowledged that he is very pro-republican “too much sometimes.” A non-drinker can be as polarizing to drinkers as a liberal can be a republican.  Perhaps what these people are really saying is, my deal breaker is somebody who threatens to change me. Really, I see this as a desire to be accepted for who we are. I get it. I admire it. I respect it. I sometimes wish a younger me had a more meaningful vetting process that protected me in that same way.

Back in my hayday, I hated beets so much that I hated people who ate beets. I used to say, in reaction to somebody who did something I did not like or approve of, “S/he must eat beets.” There is no way in hell that I possibly could have found myself in a relationship with a beet eater. Although I was always half joking, I was also half serious. But this did not protect me from dating some duds. I polled some current college students and got similarly shallow responses from the men.

“She must have good teeth.” That is a good judge of hygiene skills, ok.

“She must not be stronger than me.” Physically? Mentally? Spiritually? I am pretty sure he meant physically, ok.

The ladies I polled had a different approach all together, and I found it to be quite impressive:

*Drugs and alcohol, oh shit, those were some of my favorite activities in college…

*Abuse of any kind, awesome that these ladies have common sense and high expectations for how they want to be treated.

*And my personal favorite…disrespect toward his mom, these girls are smart and intuitive.

My entrance into graduate school tricked me into believing that I was a superpower kind of smart, going after a masters in multi-cultural literature, fueling my belief that my perfect mate must be at least as educated as me. I felt so proud that I had moved from the shallowness of despising beet eaters to seeking the hot intellectual thinker, a connection similar to that between Jane Eyre and Mr. Rochester. The deal breaker for me in that intellectually driven relationship would have been having to still call him Mr. Rochester. I would not have stuck around long enough to discover Jane’s deal breaker: that her man had his crazy wife Bertha squirreled away in his attic. So much to dissect there, but anyway, I digress. Here I was in graduate school, thinking I was so viscerally accepting and loving of all, getting ready to guide our youth toward the same higher enlightenment, while at the same time judging somebody who didn’t follow the same avenue of education that I did. As if books and college were the only path to become reflective, empathetic, intelligent, and accepting- the traits that I loved. How ironic. Still a silly little girl with lots of reflecting to do. I have one friend (my age now) who does still require her man to be equally educated. I get it, as long as she can hold this standard as a deal breaker minus the air of superiority that caused my disillusionment. She sent me this in her poll response: 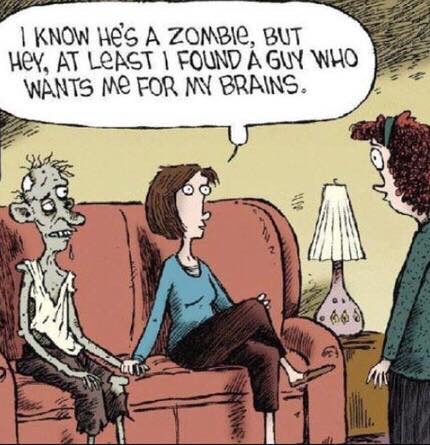 So naturally I included some 20 somethings to see what mattered to them and have discovered that, while these responses may sound superficial, I find some refreshing meaningfulness to them. But young adults are still finding their way, so I shall help them by pointing out the symbolic depth to their deceivingly superficial responses.

A young man said that body building and full body tattoos are his deal breakers. I believe that he is speaking to excessiveness as his real deal breaker, a valid and reasonable reason to steer clear, as excessiveness to some can be overbearing to a lover of moderation.

Yet another young man said that a deal breaker for him is a picky eater. He even added the advising commentary “Grow up.” Not a bad idea to steer clear of childlike palates if you have an adventurous soul looking for the same in your partner. For many, food is a compass for navigating towns, countries, and cultures. If you like to explore through food, a picky eater would be stifling.

Ladies in their 20’s spotlighted quality of job, living in their parents’ house, and type of car as subjects for their deal breakers. For the ladies, these things all symbolize stability.

My unmarried peers are forced to put more thought into this concept of deal breakers. One friend told me that a deal breaker for her is when men lie on their dating site profile. His profile identifies him as 52. Her age range is set at 49-55, so his profile is a match for her, based on age. Then you read further into his profile, “My profile says 52 but really I am 72. I know that you ladies set your age limits low, so you would have missed me.” God’s gift? No, you tricked the system. She wants to miss you. She does now want to date somebody who lied their way into being her match. Delete, deal breaker. 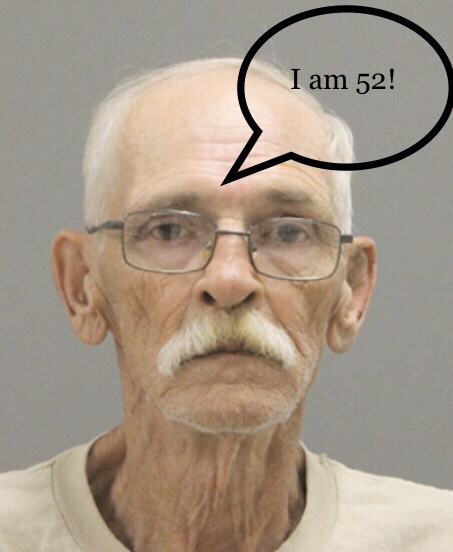 Another unmarried friend told me that she doesn’t have set deal breakers per se, but that certain things happen that break the deal. Like the time that she met a man for a first date and he placed a talking stuffed animal on her seat as a gift. Her reason for not liking the gift? “Do not bring me juvenile gifts as I am not a child. That’s just weird.” Deal breaker.

Other unmarried polled have said that deal breakers are smokers, lack of a friend circle, lack of financial and/or personal independence, lack of a physical connection. People who do not want you spend time with your friends. These are tricky. You may assume that you just haven’t met the friend circle yet while you get to know each other better. Or that s/he monopolizes your time because they are so excited about the newness of the relationship. Sure, you may have seen some red flags but you ignored them. Like I always do.

My research has helped me transform red flags into deal breakers. These are not any different from the advice that I have given to my two sons since they were way too young, “Don’t be a dick.” I never claim that this advice makes me mother of the year, but there is a ring to it. And it is solid advice. Here is my current list, born on the 4th of July:

*When on a date or a walk, he walks ahead of me. This shows me that he lacks patience and will not travel a life path beside me.

*When I suggest a plan, he shows me why it is a bad idea. This shows that he will be uncompromising about doing anything that he doesn’t want to do.

*When he spends time with my friends or family, he tells me that “I owe him big time.” This shows me that he is not interested in fully immersing in my life.

I have worked to not be so shallow, not so extreme. Not to write off people for things that I don’t enjoy or approve of. But rather to be open to, to listen to, and to accept all types of people walking all types of paths. Variety is invigorating.  I am a work in progress, striving for balance and inner peace above all else.

Be open and be receptive, but stay true to your deal breakers, the things that mean the most to you. In order to keep a clear head and an open mind, explore many paths and: 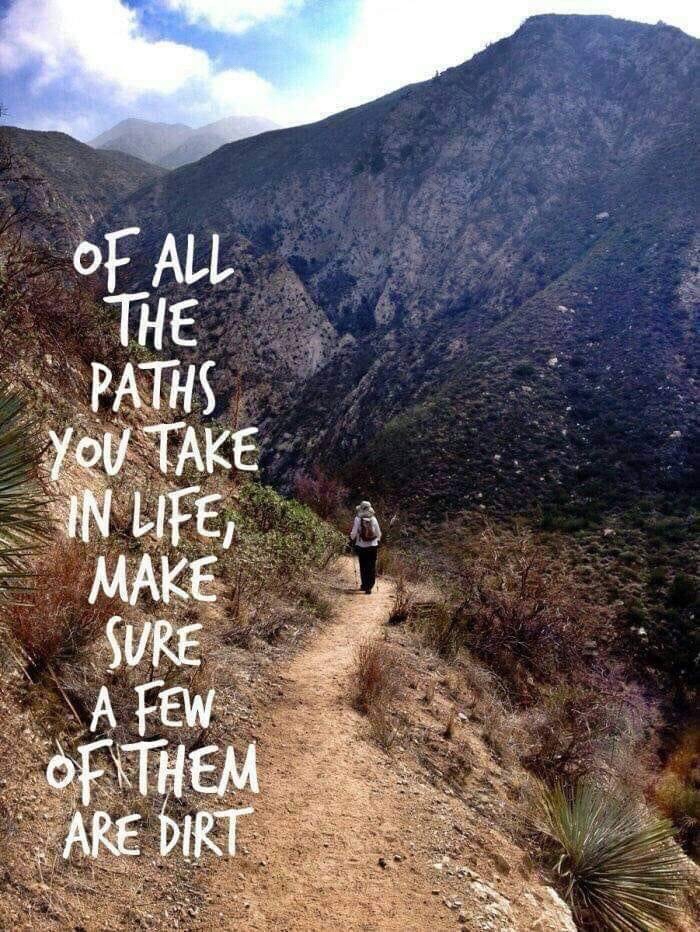 Get dirty. Step outside of your comfort zone. Experience nature and allow it to sustain you but to also create a hunger in you. Then go try some new food. Grub down, guilt free.

What are your deal breakers? Please, add in the comment section and let’s have a conversation. Let’s make this blog post interactive…!