My online dating profile says “I love to cook, and do so fairly well, but I burn brownies.” By saying that, I hope to convey that I enjoy cooking meals but suck at baking. And I hope to share something about the way I spend my evenings after work, yes. But I also hope to imply that I love the freedom that cooking affords and resist the strictness of following a recipe, like a science project. Re: I hope to imply that I love freedom and resist strictness.

My main issue with baking I can’t be patient and diligent enough to properly measure out ingredients, and if the recipe isn’t followed, the product will not turn out as promised. This is not the case with cooking.

When attempting to bake, I begin strong with all of my baking tools and measuring apparatus out and ready to go. After the 4th or 5th required measuring event, my perspective shifts into Rachel Ray mode; I eyeball it. My measuring spoon doesn’t fit properly into the opening and there is not way I will pour accurately into the spoon. Well, let me eyeball that teaspoon of baking soda. And there it is, a fucked up chemistry experiment that will either be dried out or too wet and explosive with baking soda. But not moist and delicious. My personality type does not match that of a baker.

Even with a box of brownies, I can’t be patient enough to wait for the timer to go off. I attempt to multi-task. So after popping the pan into the oven, I set the timer with the very best intentions, then hop in the shower and immediately and completely forget about the brownies. So I don’t hear the timer go off.  I might hear, “Mom, something is dinging. What should I do?”  Or I may be still in the shower or blowing my hair dry or listening to my favorite song or totally engrossed in my latest book. Then a few minutes later, “Mom, something is burning. What should I do?” My kids make fun of me that I burn baked goods. I blame them. God forbid should they solve either of those problems, but that is a story for another day.

Yet, I can cook and love to cook. The more chopping and dicing, the better. If I don’t have an ingredient, I toss in something else. No zucchini? I’ll add carrots instead. Or whatever is in my veggie drawer. No worchestire sauce? I’ll make some from scratch.  No fresh ginger? My cabinets are stocked with dried spices, so I’ll add powdered ginger.  You can’t do that with baking. Not if you want the recipe to work.  I love putting the water on to boil, turning to the cutting board to prep the food, all while the oven heats to my desired temperature, awaiting its marinated contents.  I love the busyness. There is no waiting around or time to forget my task at hand. There is rushing and planning and coordinating. Adrenaline rush abounds. I love that my spontaneous self can shine.

I think my detail on the dating site about preferring cooking over baking reveals so much about me, if the reader is willing to search. And think.

A man reached out to me via a dating app with a specific question about my cooking versus baking dilemma, if it is one, “I love to cook, but I burn brownies.” He called it a dilemma. I don’t. I home cook meals and purchase bakery treats for dessert. Easy.

But, I was excited that he actually read my profile and asked a specific and witty question about it. Our correspondences lead us to a phone call. One that should have lead me to stopping further correspondence but I did not do that. We got on the phone and the subject of “where were you when…” came up. And it spun its way to “where were you when we had the most recent earthquake?”

I told my infamous story of being in my school’s parking lot, getting ready to back out of my spot. I was parked right in front of the field where the football players were practicing. I put my car into reverse and right before I glanced over my shoulder, my vision got blurry and the world reverberated. Everything got blurry, so blurry that I still wonder if I heard a low thunderous sound or if I imagined it. I talked myself down off of a cliff. “Dorothy, you always knew that the drug flashbacks would come eventually. This too shall pass. Just relax and enjoy the ride.” And it did pass, after only a minute or two. I was scared. I took deep breaths while regretting stupid decisions from my college days. But just for the moment, not really. That was just a part of the spontaneous me. I haven’t lost that part of myself–it has just manifested differently now. Like chopping up carrots when I don’t have zucchini.

Once I uttered my words of regret into the phone, I was met with silence. Complete silence. Just as I began to wonder if we got disconnected he said, “Drugs. Wow. I never did anything that wasn’t prescribed to me.” Well, he is a psychiatrist and I wondered what he thought about some of the “drugs” that we prescribe to people to “help them.” Because I believe that some could be creating societal problems. Sometimes we prescribe too quickly, without enough diagnosing and testing. Again, a topic for another day. But I do know that I perceived that he viewed himself as superior for his claim. I did not.

A few topics later, we began discussing schedules, in order to plan a date. He said, “Let me check with my wife.”  This time I went silent. I have a strict, I don’t date married men policy. He quickly [attempted to] correct[ed] himself. “Sorry, I meant my ex wife.” The red flag waved almost as blatantly as the when smell of burnt brownies alerted me to my mistake.

I went out with him anyway. The date was fine, only just fine. I thought it was mediocre from the beginning. But not horrible. Not until I asked him what his weekend plans were. “I am going to purchase all new furniture for my apartment.”

“Wow! That is exciting and fun!”

“What do you mean? That sounds awesome. I would love to do that.”

“Well under the circumstances, this is exactly what I want to be doing with my life.”

“Well, I just moved out of my marriage house last weekend and have been in an apartment with nothing but a bed.”

“You are still married?”

“Separated and only because she cheated on me.” Then proceeded to give me the details that I did not desire to hear.  Oh boy, this is about as boring as awaiting the alarm that signals that the brownies are done. But also this is too fresh, too raw. He has taken out the brownies too soon.

The date proceeded awkwardly to the end, where he asked if we could get together again this weekend. Instead of stating my truth, I don’t date married men, I made a fatal error. One of spontaneity. I said, “I don’t think that you are ready.” I knew it was a mistake as it came out of my mouth. But out it was.

“You don’t know anything about my situation. I am so ready to date somebody to show her that I can move on, too.”

That was the sentence that commenced his descension into the hole.  I thought, The date began mediocre and now has taken a turn for bloggable.

“Trust me. I am fine. She is the one struggling. She is suicidal about her poor choices and because I am a psychiatrist, I feel a grave responsibility for her safety. I have been working around the clock to help her.” 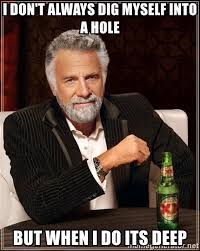 Deeper and deeper he went. Ummm…what woman would find this scenario appealing? The inner workings of my head was inquisitively wondering and btw, “around the clock” except for when you are out dating?

I made an abrupt exit, considering myself lucky to have escaped without getting any of the dirt from his shoveling on me.

Until the next day. I sat around a high top table, in a dark bar, at a 3 pm teacher happy hour, celebrating the final bell on a Friday afternoon, when the barrage of texts came through from him. He began with an unsolicited psychoanalysis of me. “You are projected your fears onto me. You fear that you will be my rebound, when really your fears are of rejection.” That is a brief summary of the 8 inch text he sent. Then four more, containing a bunch of nonsense that I do not remember. And then the final one. “You are making a huge mistake. I am a catch and if you don’t snatch me up now, you will burn the brownies, just like you always do.” My attempt at being clever on my dating profile has come back to bite me.  Possible responses?

Well at least I didn’t take them out too early and make everybody sick with raw brownies.

Or If burnt brownies are flavored with the same drama as a freshly separated man dealing with a suicidal wife, then I say, ‘Toss the brownies.  Toss them every single time.’

His psychoanalysis of me begged for me to transform into the recipe of a baker made of carefully prescribed ingredients. I bet he bakes well. When I would prefer to find the very best of me right there in my fridge, among the things that I carefully selected because I like and enjoy them, and cook them up for a savory treat of spontaneity and self acceptance.

I chose to remain quiet and to appreciate my gift for cooking meals and to accept my inability to bake brownies without ruining them. Silence is a loud and clear response.

Doesn’t he know that I just don’t even attempt brownies anymore? I dodge burning the brownies with ingenuity.  I ask my daughter to bake them or I buy them from the bakery, silly.